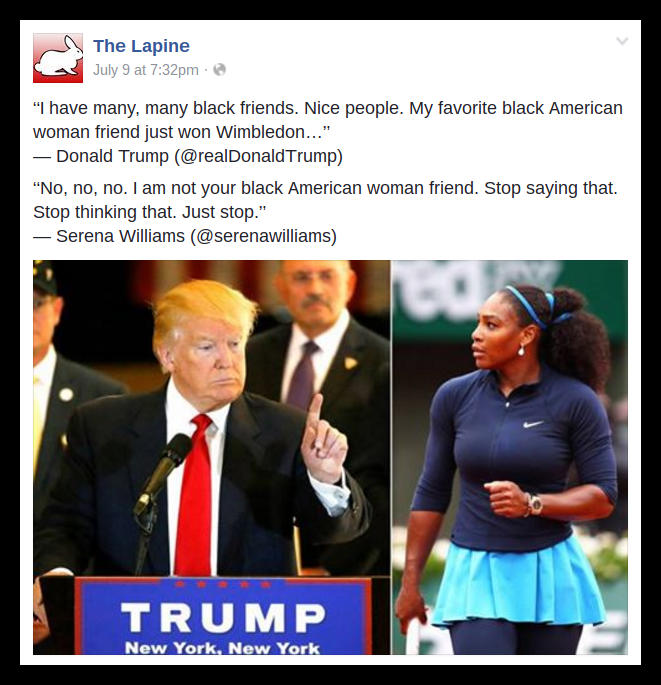 Sensing an opportunity for online approval, I posted it to my wall under the following comment “Just when we didn’t think she could get any more awesome…” I was highly gratified when multiple likes (and even a heart!) duly appeared. A few people even shared the post. However, despite having something akin to a prom queen moment on FB, something about the tweet exchange seemed “off” to me.

The producer in me (who I was trying to ignore) was distantly calling bullshit. The whole thing was just too perfect: Archetypal Avenging Black Woman taking on the Hairy White Ape. The characters were too simply drawn. Reality (small ‘r’) usually isn’t. This was more like a Reality show. I started poking around online and in moments discovered that the exchange was a production of a Canadian satirical website The Lapine.

It is hard to convey my mortification, but I’ll try: My lungs shriveled up, as though not up to the challenge of breathing, my sphincter clenched, and where my gut had been a huge well of horror opened up. It wasn’t just that I’d betrayed myself as gullible. Nor was it specifically that I had posted something I hadn’t looked into, although that is very lame.

It was that the post had been ringing alarm bells for me before I found out it was a hoax: I had been wondering if there wasn’t something inherently racist in what I was saying in the first place. Firstly, there was the issue of the Angry Black Woman arche/stereotype that I had bought into wholeheartedly. Then there was the fact that I wanted a Black Woman to address a White problem. Because that is what Trump and his followers are.

And this desire to have people of color rescue us from the worst among us, is what White liberals are counting on this and every election. Which is good for us – well, goodish, classwise most of us are fucked –  but what exactly are we, as White liberals, going to make it good for the people who keep handing Democrats the White House? It is not enough to simply provide them with an option to not vote for an overt fascist. Brown people need to be able to have a fair path to immigration. Black people need to not be shot by cops for, you know, [fill in the latest indefensible excuse]. And that’s just for starters…

We need to make White People Great – perhaps for the first and only time. Serena remains awesome, but ultimately beside the point.