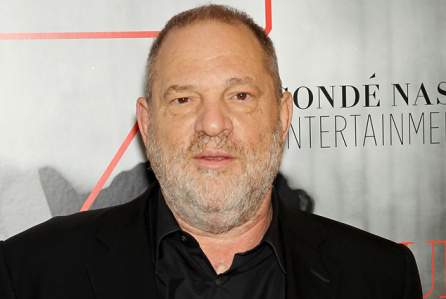 Back in 2008, I was directing a reality show “starring” a minor celebrity who one day, in an apparent attempt to impress, announced, “Last year I spent two weeks on Harvey Weinstein’s yacht just off of St. Kitt’s.”

My reaction to this bit of irrelevance was immediate and visceral: Dear God, I’d rather stab myself repeatedly in the eyes and ears than spend two weeks trapped on a yacht with Harvey Weinstein, no matter how big it was. I’m talking about the yacht…ya perv, no matter how big the yacht was.

And this was before I became aware of the sexual abuse rumors. At that time all I knew about Harvey Weinstein (from having been pretty deeply involved in the Canadian and mid-nineties so-called indie film scene) was that he was a blowhard and a notorious asshole who was given to yelling at staff. While he sounded horrible, such behavior was expected of the movie moguls.

However, in the years since, word of his rampant sexual abuse popped up on several gossip sites, and this October 5 The New York Times finally blew the lid off the scandal and took what were previously just rumors mainstream. Since the publication of the NYT piece, it has emerged that journalists have tried to tell this tale for years, sometimes encountering actual physical violence in the process.

In fact, Lainey of Laineygossip included the following information in her post about Weinstein, giving a sense of why it’s taken this long for people to talk openly about his behavior:

What would you say if I told you I received a very intimidating letter? A warning? A serious threat. Would you react the way I did? Would you be afraid? Would you desperately want to “reveal” the names behind the story but were too scared to risk your business, a family business shared with your husband, and your livelihood? What would you tell me when I say that even today, even when it’s all slowly coming out, that I still can’t quite take that chance? That’s a small, small concession to make, an inconsequential concession, compared to the concessions that the women who were alone in those hotel rooms have had to make. The point is that that’s the reach of power. That’s the corrosive effect of power. It corrupts both the people who have it and the people who are subject to it. For those who have it, it becomes a weapon against the weak. And for the weak, it limits their freedom, it compels them to compromise, and in compromising, they become an accessory to that gun, the silencer that’s attached to it.

As if this story can’t get any grosser, now it’s emerged that the NYT killed a similar piece about Harvey in 2004, and that Russell Crowe and Matt Damon (Matt, nooooooooo!) called the reporter on that piece personally to vouch for Weinstein’s Italy-based procurer of women.

Weinstein has since threatened to sue The New York Times over the October 5 article (newsflash: he doesn’t have grounds) and has been ousted from the The Weinstein Company.

On the plus side, no long-suffering director is likely to have to endure the (aspirational) story of a certain minor celebrity’s Harvey’s yacht/St. Kitt’s sojourn anymore…

This post should probably be entitled How the Gossip Press Routinely Schools the Mainstream Media because news of the three pregnant K Klan ladies first leaked on the site Blindgossip in September of 2017, which proves mostly who’s in charge of the Kardashian narrative. Hint: Her name rhymes with ‘diss.’

Blindgossip also indicates that Kris had dreamed up the idea of three pregnant Kardashian sisters years ago and has just now decided to pull the trigger, probably in response to the recent decline in ratings for Keeping Up With the Kardashians.

She may be Satan’s Handmaiden, but stupid is something Kris Jenner ain’t.

On a related note, OJ Simpson was released on October 1, 2017, and there’s a loud ticking in the back of my head counting down the seconds until Kris announces a joint reality venture with the Juice.

Aside from the fact that he’s a former family friend and was famously defended by Robert Kardashian, the then K Klan patriarch, there’s the fact that Kris always has her eyes on a potential cash prize and the pesky, yet now highly convenient, little matter of Khloe’s parentage…

Word on the reality street has it that Simpson either received or placed weekly calls with Khloe while he was incarcerated and resisted her repeated efforts, courtesy no doubt of mom, to get him to take a DNA test. However, now that he could personally benefit from such information coming out, I suspect he might be a bit more compliant.

So “hold on to your tits and bits,” here comes The OJ Simpson Show.